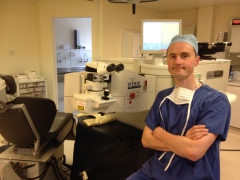 I am delighted to share with you my most recent audited outcome data. Please bear in mind that direct comparison of the following data with colleagues' data is inappropriate, due to referral patterns, case mix and personally specialised procedures. For example, some consultants specialise in cataract surgery for patients with advanced glaucoma, where final visual results are likely to be poorer than for healthy eyes.

The following figures are taken from my private practice, where I have personally analysed a consecutive series of patients' results. I have attempted to present them in as honest and as clear a way as possible to aid public understanding. I would be delighted to answer questions on any aspect of these data, should you require further information:

In addition, within my NHS practice, I recently (2013) conducted a retrospective personal audit of 50 consecutive cataract procedures, for which I was the surgeon: 100% of patients described themselves as 'at least happy' with the outcome of surgery. 96% of patients' spectacle prescriptions were within 1.0D of the target prescription.

Within my private practice, my rate of vitreous loss (a complication of cataract surgery) is <0.3%.