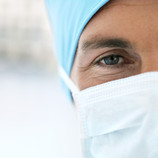 This information leaflet aims to explain the benefits of premium lenses used to replace the native lens of the eye, which, when cloudy, is known as a cataract. When a cataract is removed from the eye, a new lens (intraocular lens, IOL) is typically placed within the eye in order to allow clear vision. One of the benefits of private cataract surgery is the ability to choose what kind of lens is implanted; only standard lenses are available on the NHS.

A wide range of lenses can be placed within the eye, although typically the measurements that are taken of your eye prior to surgery guide the placement of a lens of the correct power in order to achieve the appropriate vision desired in your eye after surgery. Most people choose to have a lens placed in the eye that typically allows them clear distance vision without glasses, but, with the placement of a ‘standard’ IOL, patients would almost certainly require reading glasses for close work. With modern laser eye measuring techniques, the overwhelming majority of patients achieve their ‘refractive’ goal (i.e. the desired spectacle prescription, if any, after surgery).

There are three main kinds of premium intraocular lenses (IOLs), which may be suitable for you, which will increase the chance of you not needing glasses after surgery:

·               ‘Multifocal’ IOLs are similar in concept to bifocal glasses, except that the lens is within the eye; the goal of these lenses is to allow the ability to see both distance (e.g. driving) and near (e.g. reading) without glasses.

When most people think of an eye’s shape, they think of round structure, like a football. In truth, most eyes are more rugby ball-shaped, with the eye being a little squashed in one direction. This irregularity is known as astigmatism and is easily corrected with glasses, but, if marked, a patient’s vision without glasses will be quite poor.

A toric IOL is a bespoke lens placed inside an eye to correct a patient’s astigmatism, at the same time reducing the patient’s short- or long-sightedness. After surgery, the chance of needing glasses for distance is greatly reduced, although without the simultaneous placement of a multifocal lens (‘toric multifocal’), patients should still expect to need reading glasses. Cataract surgery in patients with marked astigmatism using standard, non-toric IOLs does typically lead to improvements in vision, but patients should not expect that their final distance or near vision will be perfect without glasses.

Multifocal lenses are specially designed to create (at least) two images at the same time, one of which is in focus for near and one for distance. The patient’s brain decides which image will be ‘inspected’ depending on what is being looked at. With such lenses, about 85% of people achieve day-to-day spectacle independence, meaning that typically they can both drive and read, e.g. a restaurant menu, without glasses. For more prolonged reading, such as a novel, however, many patients still choose to wear reading glasses.

As multifocal lenses split the light entering the eye into at least two images, there is sometimes a compromise in the quality of vision achieved. Although around 85% of patients are spectacle-independent after surgery, the distance & near vision achieved is unlikely to be as impressive as if a standard, monofocal lens (with reading glasses) had been used instead, the upside of course being the lack of a need for glasses.

Multifocal lenses are probably unsuitable for patients with optically demanding hobbies & occupations, such as astronomers or photographers, although the golfer Gary Player has notably done very well after such surgery! In the dark, some patients do complain of haloes around lights; multifocal lenses are thus unsuitable for occupational night drivers.

These lenses combine the benefits of both toric and multifocal lenses, i.e. simultaneously improving astigmatism and aiming to achieve spectacle-independence for distance and near.

An alternative approach for patients, who wish for reduced reliance on spectacles, is a technique known as blended monovision. In this technique, multifocal lenses are not used, but one eye (the dominant eye) undergoes cataract surgery aiming to achieve good distance vision, while the other eye is set for closer distances. While some patients (typically long term contact lens-wearing patients) can tolerate a sufficient difference between the two eyes to allow a true reading eye and a distance eye (known as true ‘monovision’), most cannot. However, aiming for a subtle difference in prescription between the two eyes (ideally around 1.25 Dioptres) allows greater functionality around the house, and is often sufficient to allow supermarket shopping without glasses and some reading, all without the disadvantages of multifocal lenses.

The cost of toric and multifocal lenses is significantly greater than for standard intraocular lenses. Most of the larger insurance companies do not fund the extra cost of these lenses, the cost being passed directly to the patient as an ‘excess’. It is worth considering, however, the potential likely savings made on, for example, varifocal glasses in the future. There is no extra charge for the blended monovision technique, as standard lenses are used, unless the patient has significant amounts of astigmatism, in which case toric lenses will be suggested.

Although your eyes will have been measured using a modern, laser-scanning technique, there is no absolute guarantee that the refractive outcome (spectacle prescription, if any, following surgery) will be perfect due to: the empirical nature of the formulae used to estimate the lens power; and the variation between individual patients’ eyes in their response to surgery (e.g. lens position within the eye and astigmatic effect of incisions).

This means that for distance, approximately 90% achieve a refractive outcome within 1 Dioptre of their goal, and approximately 70-75% within 0.5 Dioptre. In other words, despite using modern laser-scanning techniques for measuring eyes, there is a small, but significant chance of being spectacle-dependent following surgery, for both distance and near. The chance of patients having a significant postoperative refractive error (need for a small spectacle correction or a “refractive surprise”) is typically greater for patients whose eyes are either very long- or short- sighted to start with. Subsequent corrective refractive surgery may be possible for some patients at a later date, but is not included as part of this surgical package.

In the unlikely event of a surgical complication, it is possible that a premium lens would not be an appropriate choice of lens, the decision being taken during surgery. It is important to understand that, in this eventuality, it may be necessary to use a standard intraocular lens (i.e. not a toric or multifocal lens). For some such patients, subsequent surgery to achieve spectacle-independence may be possible. In the rare event of a non-premium lens being used, the cost of the surgery will naturally be adjusted downwards to reflect the lower cost of the lens implanted.

In your case, I would recommend:

It is important that you contact me in advance of surgery if you wish to be considered for an alternative type of lens.